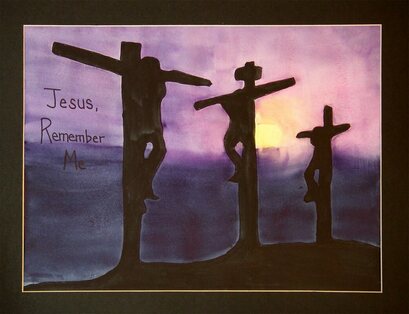 ​What can we learn from the thief on the cross?

Three men had been condemned to die.  Two were guilty of theft.  But the third was different.  He was the Son of God, the Saviour, perfect and sinless.  Dying as a substitute for repentant, believing sinners.

And that is what the dying thief learnt.  It changed his whole future !

The thief was a SINNER.  He had been tried and condemned in a Court of law.

He was the SAME as his companion.  Both of them had verbally abused the Saviour.  He was clearly no better or deserving.  None can merit God's salvation.  All have sinned.

That he was suffering and in pain there was no doubt.  Yet he looked away from himself and his difficulties and fixed his eyes on the Saviour.  That is the way to get salvation.

He SWITCHED sides.  In the morning he was abusing the Saviour.  But then came a change.  He saw that his estimate of the Man on the centre cross was all wrong.

By MIDDAY he had turned right around.  He acknowledged his sin and spoke of the worth of the Saviour.  That is REAL REPENTANCE.  There is no salvation without it.

Look at the STEPS the thief took.   Note the order of them.

First he FEARED God.  He came to the realisation that he had to give account of himself to God.  Of course he had broken human laws and been condemned by an earthly judge!  But that was nothing compared to being judged by the great God of Eternity.

Then he FACED his own sin.  He accepted his punishment was just.  No excuses.  No blaming others.  Admitting you are a sinner and bowing to he sentence God has passed upon you must come before you can have salvation.

Finally he had FAITH.  He believed that the dying Saviour would rise again and reign in His own Kingdom.  And asking to be remembered he showed FAITH in Christ to meet his need.

And of course he received SALVATION.  The person that comes to the Saviour will NOT be cast out!  That day the thief was received into Paradise.  REMEMBER he had nothing and could do nothing.  He was dying.

There was SUPERNATIONAL events that day.

Darkness at midday.  An earthquake.  People rising from the grave.  But none of these happened until after the thief had trusted the Saviour.

God will never send signs and wonders to persuade you about His Son.  Life the thief, you must base your faith upon God's Word.