It is never too late to be saved 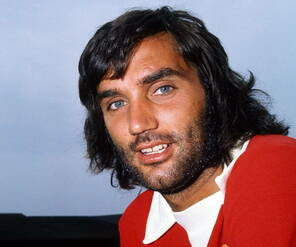 Almost everyone has heard of George Best but not many people know that he became a Christian three weeks before his death.

As he lay contemplating his then inevitable death, the 59-year-old experienced a remarkable turnaround from a life of promiscuity and alcohol. In November 2005 he prayed for forgiveness for everything he had done that had caused pain to himself and others.

By George’s side the entire time was a nurse known only as Joyce, the woman who his sister Carol McPherson said helped him find true peace and happiness.

In the hospital God used Joyce, a Christian nurse, to read the Bible and pray with George at every opportunity.
His sister Carol said "When I heard that George had finally found God I was so happy. My heart felt light and I knew he would be OK then”.

George Best’s worst decision was taking his first drink but about three weeks before his death George accepted the Lord Jesus Christ as his own, Personal Saviour, making without a doubt the best decision in his life.
Carol said "I'd been trying for years to get him to understand but George had so many things going on in his life that he didn't think he'd have time to be a Christian.

"But in the end I suppose he'd no alternative and he managed. So many other people are in the same situation as George was and I just pray that they'll read this story and find a way to be saved too."

The 60-year-old has had the story of his conversion printed as a religious tract entitled George's Best Decision.
It says: "George enjoyed many privileges as a celebrity. His status meant he was treated like royalty on many occasions”. "But he gained his place in heaven when he took his place as a sinner and not as George Best, world-famous footballer."